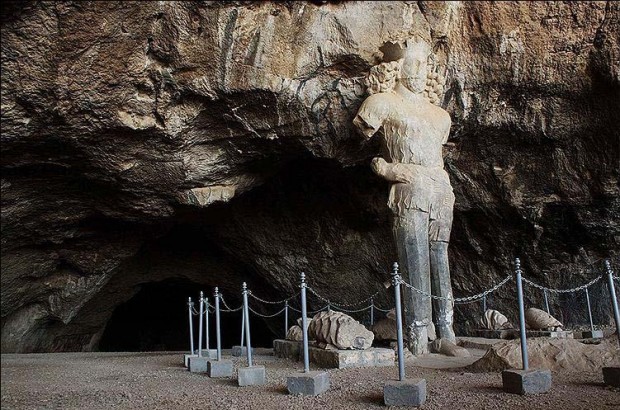 Bishapur (or Bishâpûr) is an ancient city situated south of modern Faliyan, Iran on the ancient road between Persis and Elam. The road linked the Sassanid capitals Istakhr (very close to Persepolis) and Ctesiphon.

Bishapur was built near a river crossing and at the same site there is also a fort with rock-cut reservoirs and a river valley with six Sassanid rock reliefs.

HistoryAccording to an inscription, the city itself was founded in 266 by Shapur I (241-272), who was the second Sassanid king, restored the borders of the empire to where they had been in the Achaemenid Persian period, inflicting a triple defeat on the Romans. He built a new capital that would measure up to his ambitions: Bishapur, Shapur’s City. The city was not laid out in the circular design inherited from the Parthians, but followed the grid (Hippodamian) plan used by the Greeks. Outside the city, Shapur decorated the sides of the Bishapur River gorge with huge historical reliefs commemorating his triple triumph over Rome.

The city was built by Roman soldiers who had been captured after Valerian I‘s defeat in 260. However, it was not a completely new settlement: archaeologists have found remains from the Parthian and Elamite ages.

The city remained important until the Arab invasions and the rise of Islam in the second quarter of the 7th century. There were still people living there in the 10th century.

Location: Bishapoor, 120 Km away from Shiraz

The trip includes: An English speaking guide, the transport, The Entrance Tickets, Lunch

Our guides are certified and will enthusiastically tell you about the glorious history of each site. We make use of comfortable cars and we’re praised for the delicious and authentic restaurants we bring our guests to. We can provide driver guides therefore you keep the costs down for this incredible tour!